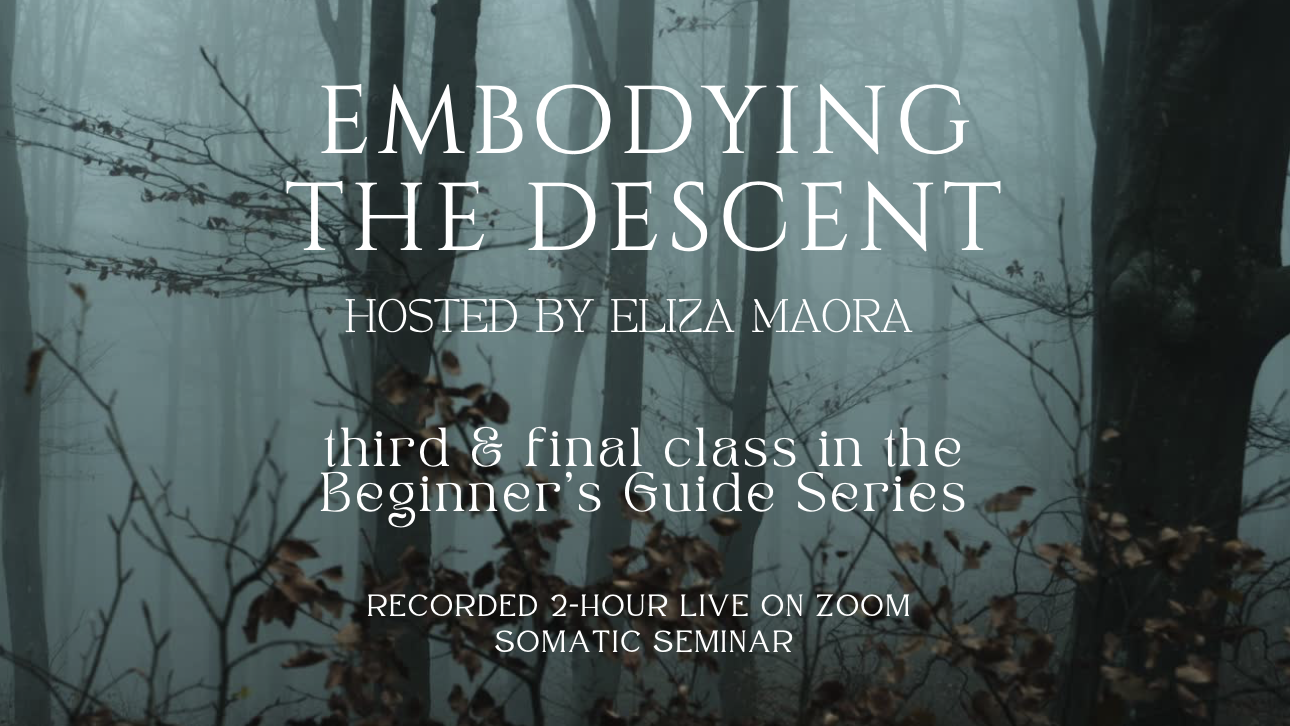 This virtual class holds inspired instruction for the Sophianic Descent by way of somatic integration techniques. This seminar is assistance in the innate shamanic purification of the false authority that arises during Sophianic embodiment, opening your womb, descending down into the earth, and merging with the Womb of Gaia.

'Embodying the Descent' is the third and final seminar in the 3-Part Beginner's Guide to Sophianic Womb Shamanism. This Descent Class is offered separately from the Beginner's trio as it is an integrative workshop that could be applied across multiple transformative experiences.

However for the full picture and entire study, please purchase Class 1, 2, and 3 together here at this link: Beginner's Guide to Sophianic Womb Embodiment 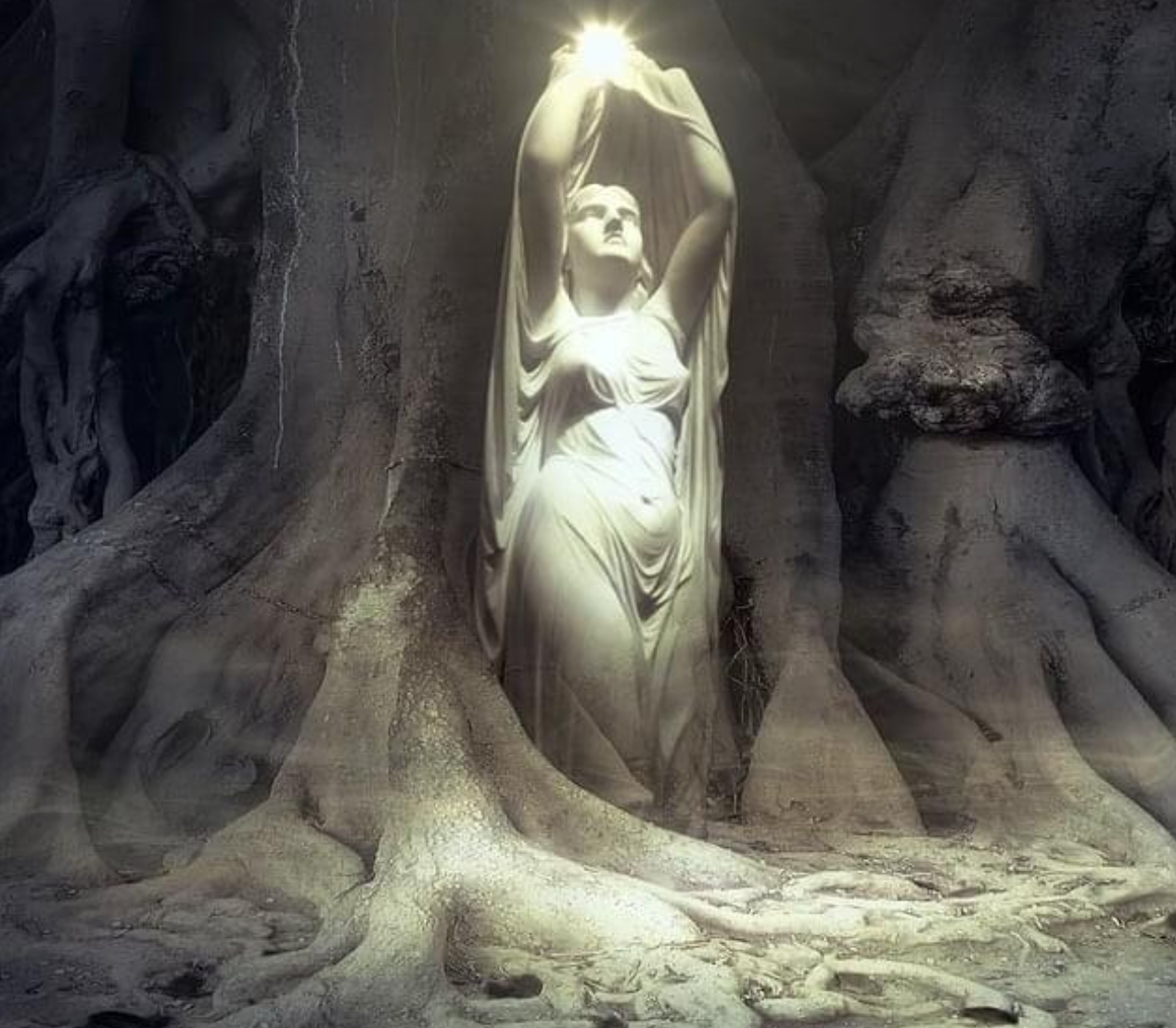 I love how spirituality is turning with a fuller focus to
The Descent.
We know it is crucially needed for humanity's eyes to turn  inwardly, and for the collective to experience how their reality has been in shadow.
And we certainly are in shadowlands.
We have been there for a long time. The spiritual war of material worlds is anything but new. However it is growing in witness now. This growth is a good sign.
How *seen* the war is becoming by the general populace is a good sign.
It doesn’t mean the war is getting worse even though it seems bigger now; it means it is getting better.
The more people who can see what has been going on means that we are closer to resolution as a whole. We want people to see it. That has been the prayer.
As people descend into the earth - out of the collective hypnosis and into physical reality - , they collect their shadows. The hidden and forbidden soul parts
. The more that reality is uncovered and able to be seen, the more the war is revealed.
The more that we deepen in connection with the Earth through descent, the true light illuminates.
The light that could never harm. The light that illuminates all harm.
There are a lot of different lights when connecting to guides, your higher self, the sky, and upper realms. However there is only ONE LIGHT that conceives all of nature.
There is only ONE LIGHT for which Gaia will open her legs and make love with for creation. There is only ONE LIGHT that seeds all organic life here including humans.
ONE LIGHT, One Father.
However when looking up for healing power, many lights arrive in response to calls for help. All of these lights want control and opportunity to impregnate, to shine and reproduce like the one light.
And all of these lights are what causes the sleeping.
The ONE LIGHT could never put you to sleep as this is the light that
generates life as our own physical matter.
The many lights cause distortion and a hypnosis which is why our Earth does not naturally procreate with them. The war of many lights hides this distortion by a veil of illusion. It is made by artificial intelligence that implants when the many lights procreate with you and birth a creation of matrix power.
It is easy for those of us without the veil to see who is still very much in the process of descending. We are here for you and we love you more than we could ever describe.
After the descent, ascension becomes real. It happens automatically. You descend down into the center of the center of the womb of the Mother, into what I call the Egg of Conception, and become present in the original spark of all creation: you meet the true masculine divine light source.  
You merge with the organic light that seeded the first life.
This is when Love and Light become embodied. You are their child. You are the trinity. You are innocence rebirthing in every moment.
I will always be a love and lighter!
I could never not be! Love and light comes from embodiment of the rainbow spectrum which forms with a completed descent. It is a holy life path of sacred union, and not from a manifestation or mindset.
True love, light, and multidimensional living becomes embodied after the descent.
5D+ is real and it’s here and it isn’t a spiritual concept; it’s an entire life and resealing of primordial timelessness. 5D is not a big deal in the big picture of the One Light, but the many lights will have you strive for it.
After the descent, you are very much living in multi-dimensional embodiment - untouchable by the war that was once controlling you - stationed exactly where you are meant to be, but also in many dimensions at once.
And how you get to this place requires an absolute loss of gnosis. The descent requires an absolute loss of gnosis. Forget everything and lose all your power that was built by the many lights.
You simply cannot know how to descend. You cannot have ANY idea or resources what so ever to guide you.
You will be as alone as one could ever be as a fractal field of union.
This is the Sophianic Path. 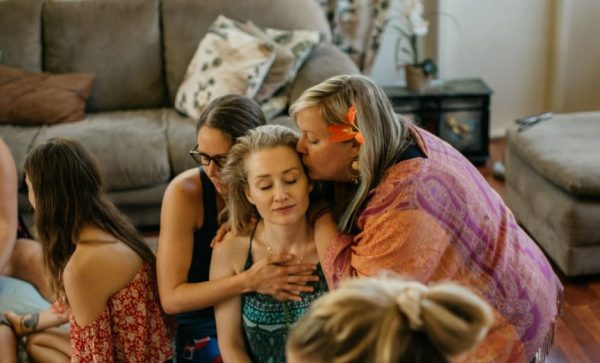 In this  2-Hour Integrative Somatic Workshop, Eliza teaches intentional somatic experience for direct experience of integrating DESCENT in the body.

It  is recorded from a live event and now distributed for life-time access. When you receive the email with the link, be sure to download it and save it to your files for future viewing. 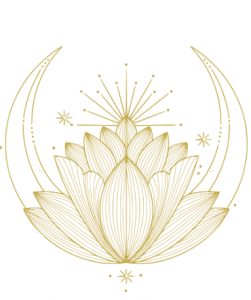 Preparation Invitation for the Seminar

Ask Sophia to join your dreamtime

Limit any interactions with less than life-affirming individuals

Arrive to the call with a warm tea in a cozy and quiet space. Make space to lay down and relax.

If you have the hour before to be in solitude and silence such as journal, meditate, or take a nature walk alone - this is a great way to prepare.

The nature of Sophianic Shamanism is soul retrieval and trauma healing, Please recognize that while Eliza is a Trauma-Trained Professional and all of her offerings have special attention and tenderness towards trauma, this seminar is designed for a collective healing and class atmosphere. For those with acute trauma, please only move forward with this seminar if you have already established personal support available to you.