Since I was a young child, I always felt the mothering aspect of myself.

I have known I wanted to be a mother since I was little and I have always been in and out of the Mothering archetype. I found myself surround by babies constantly. Since I was 8 I was babysitting newborns. This relationship to mothering is natural for me. 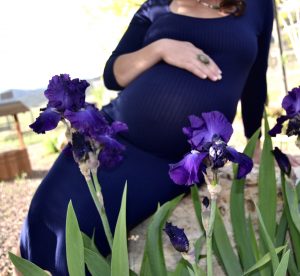 I am currently pregnant with my third child, and each pregnancy has similarities in an otherworldly sense.
Before my children’s souls merged with my body, they came to me in dreamtime. I could hear their cries, and would feel like I was leaving someone behind when I would leave my house. Every time these “signs” would come into my realm, I knew another soul was wanting to be born.
With my first, Shea, I was super sensitive to the energies around me, and had some psychic and telepathic events. A week before his birth, I was laying in bed and saw very clearly the number 21. I knew that was when he would be born. A week later on the 20th, I went in to labor and 18 hours later in the early morning of the 21st, he was born on our bed in our camper. Once he was born I started to realize that all those extras senses were not me at all… but the power of him and me together, because the heightened frequency stopped quickly after giving birth to him.
I felt strongly that this little baby was wiser than me in many ways.
His presence was always so much bigger than his tiny body, and I found myself treating him like he already knew.
Which of course, happened to be the case.
During our five, almost six years together, I am finding how he is teaching me so much just by him being next to me. I often find him speaking to me telepathically, letting me know what it is he needs. Our relationship is shamanic, ebbing and flowing, graceful. He is here to teach me to be still and patient with the unfolding of life, and reminding me of the magic that we can create.
While pregnant with my second, Kairah, I found myself being very agitated and even angry. My emotions were hard to maneuver, and I often felt intense surges of frustration.
Eliza remembers this as a moment of pure initiation for me. I almost couldn’t help but feel intense surges of energy. Even the joy and silliness that would wash over me would come from what seemed like nowhere.
Intuitively when I was in labor, I felt the water would be my safe haven, and indeed it was. Soothing and calming like never before. Kairah was born in the water in our bedroom; and even being a 10lb baby, I felt a surge of ecstasy when I pushed her out. 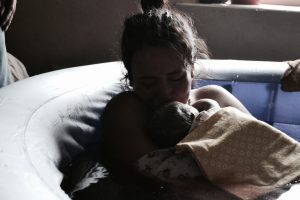 Once she was born I noticed how those intense anger surges slowly left my being, and was being expressed through her. Kairah is a fierce fireball with ranges of emotions daily. From expressing the depths of her soul to being the funniest one in the room. Our relationship is more than just this life, it is ancestral. It’s a healing of the mother-daughter relationships that my lineage needs. She is here to help heal a wound in our family line, and I am here to surrender to the surges of her emotions.
Even though I am still pregnant with my third, I can already feel a sense of her energy.
She’s steady and calm. Her presence is big and even before we knew we would be having a girl, all of the Seven Sisters just knew she was a girl.
From the very beginning of her merging with my body, she has been on the path of plant medicine and bringing me closer to my calling with healing of children. She is here for the unfolding of the new earth and she is profound in what she is here to bring.
Each one of these souls that have come through me are my little medicine children. I am still in awe how each pregnancy I was overcome with their energy and essence. I was able to get a feel, literally, of who they are. I believe it was so I can have a deeper compassion for them as they grow through life.
Because I was able to feel the sensitives of Shea, the deep sacred rage of Kai, and the calmness of Koda, I am able to step back and let them be who they are.
Featured Art By @cocorrina.co
Scroll To Top